Ricardo Domeneck: The Future of Poetry 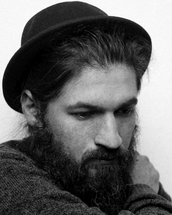 Conference at the Berlin Poetry Festival 2015


The overall theme of this conference is “the future of poetry”, and I have been invited to discuss the possible fate of our idea of poetry as primordially text. “More than a text”, this is the guideline for our conversation. I come from a country, Brazil, where the production of poetry in the post-war period was heavily influenced by the ideas of the Noigandres Group (Haroldo de Campos, Décio Pignatari and Augusto de Campos), the Brazilian core of the International Concrete Poetry Movement. From the beginning, they defended the idea of a verbivocovisual practice, texts highly conscious of their materiality as a visual sign and sound in verbal structures. Those three elements: the textual, the visual and the sound should coexist in a nearly perfect balance. Of course they also drew from Ezra Pound´s idea that certain poets will always tend to one or the other, with his concepts of logopoeia, melopoeia and phanopoeia, but the new poetry, following the technological developments of the time, would more and more be able to join all three in one type of poem, complete in itself, outside of the world of events, as they put it in one of their manifestos. It was 1952, and they set out to attack what they considered a poetry of “expression, subjectivity, and hedonism.” There was a firm belief that new technologies would necessarily lead to new forms of poetry.

Printing, it is claimed, brought an end of the hegemony of the oral tradition of the medieval troubadours, newspaper practices influenced Mallarmé´s poetry, and Hugh Kenner claimed many typographical innovations of modernists would be unthinkable without the invention of the typewriter. When new technologies arrive in the art and writing scene, we seem to go through certain stages: first, the trenches between naive dismissal against naive enthusiasm for the new possibilities, followed by a more mature apreciation of what real innovation they actually brought to WRITING itself, not simply to its forms of distribution and commercialization.

Poetry has been more than a text and been aware of performance, context, its visual and sound elements for as long as we could record it. The oldest author we know by name is a woman, Enheduanna, the Sumerian princess who lived in the city of Ur between 2285–2250 BCE. We can assume the oral tradition is older, but any record of it will reach us only through writing, as the clay tablets which brought us the hymns of Enheduanna. For at least four thousand years, the oral tradition and writing have coexisted in the world. While the Brazilian concrete poets were taking advantage of certain technologies to create a very sophisticated visual poetics, in France Henri Chopin and Bernard Heidsieck were using sound recording technology to create sophisticated sound poetry. And, at the same time, the Beats, in the United States, were producing texts hailed as new when they stretched back to Whitman, the Romantics and to the bardic tradition of Taliesin in the 6th century. In the meantime, the major part of human population remained loyal to the oral tradition, to songwriting. In areas of the world, despite Internet, the Gods are still dancing and being sung to.

Time is not homogeneous. Some are now in their naive period of enthusiasm for certain technologies such as the internet, but what true innovations has it brought to writing itself? In 1924, Brazilian poet Oswald de Andrade was already appropriating existing texts for his poems, from the colonial texts of the Portuguese Invaders, with clear political implications, as the International Situationist did in the 1950s, taking their material from commercials, or Heimrad Bäcker´s work on Nazi documents, and Russian authors such as Nekrasov and Prigov. The self-appointed avantgardists of today seem soaked in nostalgia, for the 1960s, for Warhol, for a time that predates the Civil Rights Movements or Post-Colonial Thought. Has poetry truly changed? Does poetry need to change? Most of the new technology today has simply allowed poets to return to age-old practices of the oral tradition. Are they lagging behind because of that? A future of poetry? Know its past and you will realize that any man trying to direct its future will only limit it, usually guided by the social-historical developments of his kitchen, unaware of how varied the world is.