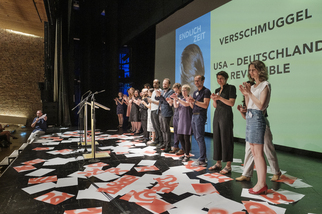 Translating poetry from one language to another is reckoned to be the crowning discipline of translation. The Haus für Poesie, formerly the Literaturwerkstatt Berlin, presents every conceivable form of translation, but with VERSschmuggel/reVERSible it has developed its very own method which it has been using since 2002. The principle is simple: poets writing in German work in pairs with fellow poets writing in another language on translating each other’s poems, without necessarily needing to understand each other’s languages. This is made possible with the mediation of translators and gloss translations and so, over several days in teams of three, they “smuggle” their lines, stylistic contexts and cultural connotations across the borders of language. The result is an adventure, a journey into the interior of foreign poetic worlds – and it is ideal for poetry, because the poets themselves are directly involved in the process of translation and authorise the results.

The poet pairs then take the stage at the poesiefestival berlin to present the results of their collaboration to the audience and their texts can be listened to and read on the online portal lyrikline as well. What’s more, the smuggled goods are published in book form as a bilingual VERSschmuggel/reVERSible-anthology from Das Wunderhorn Verlag and a publisher in the other language with not just the texts of the poems and translations, but also a CD of the readings or a QR code linking to the poets’ voices. Over the years, a truly impressive series of contemporary German-language and international poetry in dialogue has been created.

All books are published from Verlag Das Wunderhorn.