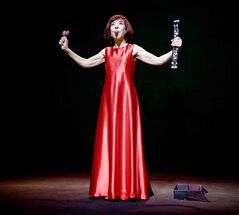 Fátima Miranda has a voice that shouldn’t exist, an impossibility, a sonic abnormality, a poet of song. At the poesiefestival berlin, she will be presenting her new show, ‘perVERSIONS’ for the first time in Germany.
She takes well-known evergreens and carries them off into the endless reaches of her sonic universe, modulates them, puts them through her sound-poetic transformer and sends them back to earth.
She selects her repertoire based on our collective memory, everything that moves and touches us, without claiming to cover every single style. Mediaeval melodies, laments, lieder, songs of shamans and Indian ragas interweave with jazz standards, Spanish copla, pop songs, fado or chansons.
The concert is structured in seven atmospheres each comprising 3 or 4 songs. Familiar, intimate moods alternate with extrovert songs full of cosmic clarity, grotesque humour and dark brilliance. Miranda sings Lou Reed’s ‘Walk on the Wild Side’ in bel canto with a noisemaker, Schubert Lieder become the song of whales.
She is accompanied on stage by pianist Miguel Ángel Alonso Mirón, who is known for his extraordinary musical interpretations. His virtuosity can be seen not only as a perfect 'servant of the voice' but also in the multi-sound way he uses his instrument. The two artists form a symbiosis of playfulness, humour and poetry, complemented by projected photographs by Chema Madoz.

Sound poet Miranda, who lives in Madrid, has developed a highly virtuoso repertoire of vocal techniques and means of presentation since the 1980s, giving her solo performances an unmistakeable face with many unique features. Miranda does not just use her voice for speaking and singing, but also as a percussion and wind instrument, combining oriental and western singing techniques with ones she has invented herself, and she has a vocal range of four octaves.
She is in the line of such great vocal performers as Cathy Berberian, Joan LaBarbara, Meredith Monk and Diamanda Galas. Her multi-media shows combine Spanish heritage and temperament with a tendency for grotesque exaggeration and ironic twists.

With the kind support of: Embassy of Spain
Project leader: Ilka Rümke

An impressive film portrait of the Flemish poet Hugo Claus, who dies in 2008, by Dutch director John Albert Jansen, made in cooperation with Poetry International and RTV Rijnmond. Hugo Claus was the most prominent literary figure in Belgium and was several times talked about in connection with the Nobel Prize. In 2001 he was awarded the Prize of the City Of Münster for European Poetry and in 2003 the Leipzig Book Prize for European Understanding. Cruel Fortune - Love, Claus & Flanders reveals the many faceted personality of Hugo Claus through his poems and a wealth of interviews with friends and fellow poets.
The screening will be followed by a discussion in which the director, John Albert Jansen, will be talking about the shooting of the film.

With the kind support of: the Flemish Representation in Berlin
Project leader: Thomas Zandegiacomo Del Bel