Poetry Talk: Every day the world 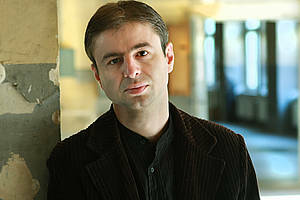 Nikola Madzirov (born in Macedonia in 1973) is something of a shooting star in new contemporary poetry. His debut collection in 1999 was a literary sensation. Since then, his poems have been translated into no fewer than thirty languages and he is an acclaimed guest at readings and festivals around the world. His third collection, Relocated Stone, published in 2011, brought him the prestigious Hubert Burda Literary Prize for new eastern European poetry in Germany among other awards.
Madzirov’s poems with their penetrating, precise imagery are unfussy, effortlessly creating beauty out of melancholy. Madzirov will be talking to poet Alexander Gumz about his work and his poetics, about the poetry of his country and the international poetic life. 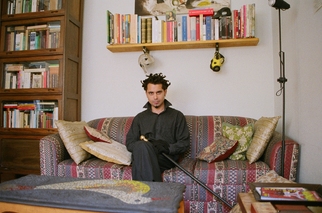 Brazilian poetry draws its energy from many different sources, from the Concrete Poetry of the avant-garde to Afro-Brazilian storytelling traditions and songwriting to Visual Poetry. There is hardly any other country where so many kinds of poetry collide with each other. Berlin-based Brazilian poet, video artist and DJ Ricardo Domeneck has picked some of the most exciting Brazilian writers from various poetic styles to meet German-speaking fellow poets for this year's VERSschmuggel translation workshop. The results of their encounter will be presented over two evenings on 5 and 6 June in bilingual readings.
Ricardo Aleixo (born 1960 in Belo Horizonte) is a poet, essayist, visual artist, sound designer, singer, composer and performer. His work, reminiscent of that of the concrete poetry of Augusto de Campos, is characterised by formal research and multi-media experimentation. Barbara Köhler (born in Burgstädt in 1959) lives in Duisburg as a writer and translator of such writers as Samuel Beckett and Gertrude Stein. She also works with video and makes text installations and multiples, which she exhibits as temporary and permanent works in public spaces and private gardens.
The poems of Jussara Salazars (born in Pernambuco in 1959) reveal a religious and mythological world characterised by inter-textual reference and metaphorical language. To research her poetry collection Carpideiras she received the Criação Literária fellowship from the Brazilian Culture Ministry in 2009. The poetry of Christian Lehnert (born in Dresden in 1969) could be described as discrete metaphysics. His collection Aufkommender Atem [Emerging Breath](2011, Suhrkamp Verlag) is dedicated to the great religious questions, without forgetting the everyday.
Dirceu Villa (born 1975 in São Paulo) is a translator of Ezra Pound and reader of Ovid, Guido Cavalcanti and Baudelaire. His radical plurality finds its way into his poems as narrative monologue, dramatic excerpt, delightful love lyrics or as descriptive tour de force which is always subject to precision of rhythm and imagery and concision of expression. Ulf Stolterfoht (born in Stuttgart in 1963) became known to a wider audience with the publication of his Lingos collections from Urs Engeler (Lingos I-IX, translated by Rosemarie Waldrop, has been published by Burning Deck Books, Providence, Rhode Island). He has also translated Gertrude Stein and Tom Raworth, spoken with Peter Dittmers on questions of poetry (Ammengespräche, roughbooks 2011) and founded the virtual Empire of Brueterich. Since 2008 he has been a guest professor at the German Literature Institute in Leipzig.
The reading will be followed by Brazilian music in the foyer played by bye bye brasil.

ZEBRA – Night of the poetry film

The 6th ZEBRA Poetry Film Festival is getting closer. The film festival for poetry will be taking place for the 6th time from 18 to 21 October 2012 in the Babylon Cinema, organised by the Literaturwerkstatt Berlin. The poesiefestival berlin will be providing an exclusive preview of the festival, showing an exciting selection from the current submissions for the competition and this year's special theme, Poland.