This seminar will introduce teachers of class grades 7 to 12 to new concepts for the teaching of poetry and familiarise them with them. In the first part of the seminar, journalist and documentary film maker Marion Hütter will be presenting excerpts from her film Dichter und Kämpfer – Das Leben als Poetry Slammer in Deutschland [Poet and Fighter - Life as a Slammer in Germany]. After this, in a panel discussion. she will be talking to performer and slammer Till Reiners about the German Poetry Slam scene.
In the second part, we will be introducing current ideas for the teaching of poetry. In various workshops, participants will have the opportunity to try out these new teaching methods and ideas in practice. Contemporary poetry, poetry performance and a film workshop will provide opportunities for analysing and transforming poem texts or producing their own poetry film. Participants do not require any previous knowledge.

Syrian poets such as Adonis, Muhammad al-Maghut and Nizar Qabbani are some of the major figures in Arabic poetry and have defined our image of it up to now. But Syrian poetry is nonetheless largely unknown in Germany. In this poetry talk, two poets from different generations will be talking to Subhi Hadidi, who knows the Arabic, and especially the Syrian, cultural scene well, and providing an insight into the poetry of their country. Each poet will be presenting a poem that they see as being important for Syrian poetry and relating its author to the Syrian literary scene as a whole. Using these as examples, they will be talking about what characterises Syrian poetry and tracing the developments that set each generation of poets apart from its predecessor, taking up earlier features and recasting them, and placing them in the context of world literature.

Syria between democratisation and power struggles 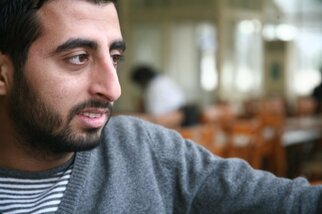 A bloody conflict has been raging in Syria for more than a year. The international community is acting hesitantly, and reliable information on what is happening in the country only trickles out slowly. Three poets and a journalist from Syria will be talking about the revolution and their visions for it and about the prospects for realising them. All four guests have experienced the events of recent months at first hand and take differing positions on the various currents in the revolt. At the heart of the discussion will be questions about the role of poetry in and for the revolution and how intellectuals as poets and/or activists see the political situation.

Syrian poetry has an important place within Arabic poetry as a whole but is practically unknown in this country. Its players have had a share in the debates on form and function of poetry in the modern age and in the development of new currents. Four poets from different generations will be revealing the many facets of the Syrian poetry scene and society as a whole. Their poems cover a wide range of subjects and poetic forms from coming to terms with city life as contrasted with scenes of rural life to universal subjects such as love, loss and family ties, all viewed from many different perspectives. What they have in common is a rejection of ‘big’ philosophical questions and an often surprising view of the everyday. In the younger generation just as in the older one there is daring formal experimentation, with many poems combining old and new and showing a familiarity with the prevailing currents of world literature.
Hazem Alazmah (born in 1946 in Damascus, Syria) began publishing late, but was immediately hailed as an important figure in the 1990s. With no recognisable forerunners, his verse is marked by its experimental forms and complex but fluid language.
Nouri Jarah (born 1956 in Damascus, Syria). In all the changes his poetry has gone through, not least with changes of location, one thing has remained constant – the childlike perspective of a direct gaze stripping away outward appearance, giving very personal access to questions of poetry, the world, love and time.
Rasha Omran (born in 1964 in Tartous, Syria), is one of the best-known poets of the younger generation and speaks in her poems about loss and yearning as well as the small and unspectacular things of everyday life.
Omar Soliman (born in 1987 in Alkotaifah, Syria) has been awarded many literary prizes. His poems are marked by slight mourning as well as feelings of solitude and emptiness, for which he tries to compensate by focusing on small details.

Film: End and Beginning - a Meeting with Wisława Szymborska

On 1 February this year, the Polish poet and Nobel laureate Wisława Szymborska died in Krakow. End and Beginning (Einde en Begin) is a portrait of this celebrated poet and a journey, at once melancholy and full of humour, through her work and through Polish history. Director John Albert Jansen visited the publicity-shy poet at home and met an uncomplicated and mischievous lady with a great sense of humour.
The screening will be followed by a discussion in which director John Albert Jansen will be talking about the shooting of the film and working with Wisława Szymborska.
Project leader: Thomas Zandegiacomo Del Bel