In a poetry talk, La Caution, Olivier Gagnier of the French Ministry of Culture, the sociologist Sébastien Barrio and the French studies specialist Eva Kimminich will discuss the situation in the French Banlieues, as well as the influence and language of rap. 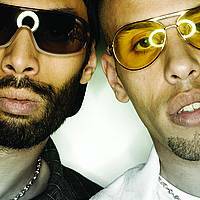 Soldout halls, hits in the charts, effusive reviews: La Caution are the highflyers of French hiphop. And at the poesiefestival berlin they will be in Germany for the first time. “Their texts, uncompromising and with no taboos, offend sensitive souls but carry away those who are willing to confront questions about the Banlieue”, wrote Le Parisien. La Caution wants to give the Banlieue a voice which is a permanent component of public discourse and not just an outlet for social problems, above all though an artform too: “People just see rap as a kind of social scream”, says Nikkfurie, “we only get a call when there’s a rebellion. This tends to get on your nerves.”

At home in a Paris suburb their music is a very personal and sometimes brutal journey through the concrete jungle of the Banlieues. The band have high expectations both of themselves and of their listeners. “Something remains of a text when the content is underlined by a poetic form. Our work consists in getting every syllable to rhyme”, says Nikkfurie of La Caution.