The Balkans were and are a synonym for Eastern and South-Eastern Europe – they encompass highly diverse countries, for centuries subject to a contest for hegemony between Austria, Russia and Turkey. The Literaturwerkstatt Berlin will be devoting its VERSschmuggel translation workshop to the languages of the Balkans. The results will be read out aloud on two evenings.
Some of the Balkans’ most important poets will be coming to Berlin for VERSschmuggel; German mother-tongue poets will translate them and vice versa. In a translation workshop spread over several days, the poets will work in groups of two, on the basis of interlinear translations and with the help of an interpreter, to produce new versions of their respective poems in each other’s language. This procedure is optimal for poetry, as the poets themselves are integrated into the process of translation and can work the complex text structure of a poem into the coordinates of sound and rhythm. VERSschmuggel thus offers an opportunity to the poets to acquire a profile in another linguistic area. Poets taking part will include
The texts will be published next year in an anthology, and all poets involved will also be appearing on the internet page for poetry, lyrikline.org. The anthology of the German-Irish VERSschmuggel, part of the poesiefestival berlin 2004, has just appeared as book with CD (Verlag Wunderhorn, ISBN: 3-88423-261-4, 19,90 EUR).

Discovery: The East in the West 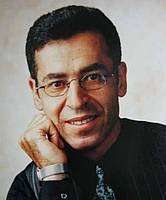