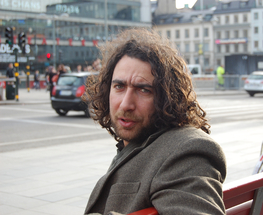 In this long night of readings, some of the poets whose works have been the starting point for films in this year’s festival can be seen away from the screen. From Australia to Canada, from Arabic to Norwegian, the reading will showcase the diversity of international poetry. But the poets will not just be reading their poems, they will also talk about their view of poetry films from their perspective as poets. What is it like to see your own poem turned into film images? What is it like to change sides, even, and as a poet film your own poems? The poets’ long night of readings will offer a space for live poetry within the festival and is intended to be a site of contact and exchange between poetry and film. Maybe some film maker or other will even find inspiration here for their next poetry film project.

With the kind support of the German Literature Fund, NORLA, Wallonia – Brussels International.