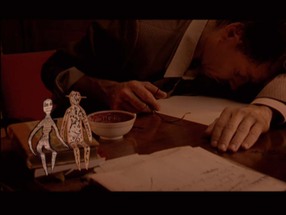 This programme features impressive documentaries providing affecting insights into the lives and world of poets and artists. The documentary »Braxilia« (BRA 2010) by Danyella Proença follows the German poet Nicolas Behr through Brazil and lets us into his poetic view of his home city, combing the futuristic architecture of Oscar Niemeyer with the poet’s playful language. In »Witness Downtown Rising Renga« (USA 2012) by Nikhil Melnechuk, eleven New York poets including Bob Holman, Eileen Myles and Quincy Troupe respond to the work of the artist Todd Stones, who has spent ten years painting pictures of the destruction and rebuilding of the World Trade Center. The portrait »Elegie de Port au Prince« (F_/_CAN 2011) by Aïda Maigre-Touchet shows the impressive world of the poet Dominique Batraville. He wanders through the ruins of the Haitian capital singing songs about the catastrophic earthquake that devastated his city. His melancholy songs are mixed with the images of his once so joyous home. Jon Garano follows with his feature documentary‚ »Urrezko Eraztuna« (S 2011), the Basque poet Kirmen Uribe through his city and on out to sea. With added animation, the film enters into the poetic world of the poet and his family. These and other films illuminate the worlds poets live in.