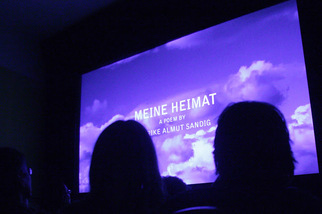 Every two years the ZEBRA Poetry Film Festival presents the best poetry films from around the world.
The 6th ZEBRA Poetry Film Festival will be taking place in the Babylon cinema, Berlin from 18-21 October 2012, offering insights into an art genre between poetry, film and new media. In five sections, it will be featuring a competition, programmes of films presenting new works, a look back at poetry film classics, a Gerhard Rühm retrospective, a programme for children, young people and teachers of poetry, as well as readings, workshops, discussions and performances. This year’s focus is on poetry films from Poland.

870 submissions have been entered from 63 countries, and the programme commission has selected 171 films from amongst the entries for the festival, 30 of which have been nominated for the competition. An international jury will select the winners of the main prizes, with a total value of EUR 10,000. Films of no longer than 15 minutes duration relating to a poem aesthetically or in their form or content and produced after 1 January 2009 were eligible for entry.

This year‘s ZEBRA Poetry Film Festival has several new features, including new prize categories for the Best Debut Film, Best Film for Tolerance and Best Poem Performance on Film. This year, too, for the first time the festival called for entries of film versions of the poem [meine heimat] ([my home]) by Ulrike Almut Sandig. The best results will be shown during the festival.

The ZEBRA Poetry Film Festival has established itself as a platform for the international poetry film genre, offering poets, film makers and festival organisers a forum for meeting their audience and exchanging ideas and experiences.

The Sections of the Festival:

Competition [W]
30 films have been nominated for the competition, and will compete for these prizes: the ZEBRA Prize for the Best Poetry Film, donated by the Literaturwerkstatt Berlin; the Goethe Film Prize, donated by the Goethe Institute; and the Ritter Sport Film Prize, donated by Alfred Ritter GmbH & Co KG. The prizes will be awarded by an international jury.
This year will see the first ever winners in the categories Best Debut Film, Best Film for Tolerance and Best Poem Performance on Film. The film commission has nominated three films in each of these categories, and the prizes in these categories total EUR 5,000.
The jury of radioeins listeners will also be awarding an Audience Prize, and children and young people will decoide on the winner of the ZEBRINO Prize for the Best Film for Children and Young People.

Prism [P]
The Prisma section of the 6th ZEBRA Poetry Film Festival will be presenting eight programmes showcasing the wide range of the poetry film genre by featuring films from among this year’s entries.

Focus on Poland [F]
Poland is the country in focus this year. As well as a programme of poetry films from our neighbour country, the results of the cross-border Poetic Encounters workshop will be presented. Polish film makers Wiola Sowa, Maciek Majewski and Łukasz Twarkowski have worked with Berlin poets Norbert Hummelt, Nico Bleutge and Christian Filips to create film scripts based on their poems for the 6th ZEBRA Poetry Film Festival and then realise them jointly. They will be showing the results in the festival and talking about working together. This is the second Poetic Encounters; in 2010 the focus was on Israel.

Specials [S]
For the first time, the festival has invited entries of films based on a selected poem.
33 film makers from 13 countries have made film versions of [meine heimat] ([my home])by Ulrike Almut Sandig. The best three films will be presented in a conversation with their makers, with ten other films being shown as well.
The guest programme diwans.org will be presenting sound and video creations based on texts by Hafiz and Goethe as part of a web performance. A colloquium featuring film makers, poets and scholars will be discussing ‘what makes a poetry film a poetry film?’
Eleven of the poets whose poems have been filmed for the festival will be reading their poems in a long night of readings.

Flashbacks [R]
The Flashbacks section will be showing forerunners and origins of the poetry film. This year the festival will be concentrating on works from the European avant-garde from the late 1920s to the best-known proponents of the American experimental film genre in the late 1940s.
There will also be a retrospective feature celebrating the life work of the poetry film pioneer Gerhard Rühm. In the mid-1960s he was experimenting with literary films and the audiovisual realisation of poetry. A co-founder of the Vienna School, he will be present as a guest of the festival and will be presenting some of his more rarely seen works.

ZEBRINO [Z]
The programme for children and young people has been expanded. Not only will they be awarded their very own film prize,  but they will also be making their own poetry film. The poetry film workshop will be taking place in the Literaturwerkstatt Berlin ahead of the festival proper on Fri. 12 October from 4-6 pm, and on Sat. 13 October and Sunday 14 October from 10 am to 6 pm. Children and young people aged from 10 to 14 may take part. Registration at kulturellebildung(at)literaturwerkstatt.org.
But the festival has a workshop for teachers too, in which they will be given guidance as they try out methods for using audio-visual media in the teaching of poetry in schools, while a colloquium will give them the opportunity to discuss ways to integrate poetry into the curriculum.