Message from the Governing Mayor of Berlin, Klaus Wowereit 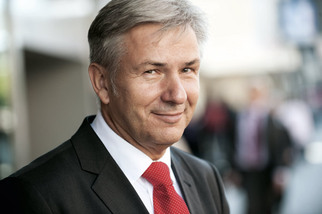 Berlin is a film capital with great international appeal, as demonstrated by the many film and television producers based in the city, for instance, and Berlin’s enormous popularity as a film location. As a film capital, however, Berlin also depends on the passion that cinema inspires. This passion is expressed not only in a unique array of movie theaters, but also in the city’s wide variety of film festivals.These include the ZEBRA Poetry Film Festival, which is marking a small milestone this year with its fifth edition. Congratulations!The festival should also be congratulated on its impressive profile as themost important international platform for poetry films. That is what makes this festival so special: it shows new short films from around the world, all of which have one thing in common – every one of them is basedon a poem.

And that means that both cineasts and poetry fans will be turning out to see the ZEBRA Poetry Film Festival bring poems to life forwhat is now the fifth time.In this spirit, I would like to welcome all of the filmmakers, poets, and artists coming from Germany and abroad – and of course all of the audiencemembers – to the 5th ZEBRA Poetry Film Festival in Berlin. I hope you will enjoy the movies at Kino Babylon, and I would like to wish our visitors from outside the city a very pleasant stay in Berlin and lots of inspiration and new ideas. My thanks go to all those who helped to make this wonderful highlight possible as part of the poesiefestival berlin, especially Literaturwerkstatt Berlin and its partner interfilm Berlin, as well as the supporters, partners, and sponsors.

The ZEBRA Poetry Film Festival – the film festival for the art of poetry – was the first and is the largest and most important platform for poetry films. More than 900 films from 71 countries have been sent in for the fifth competition to find the best poetry films. The international programme
committee made up of filmmakers and poets has brought together an exciting programme of features round about the competition, from films
for children to horror and erotic films for the midnight hour. Poetry films are as old as film-making itself, and needed the new technologies
to respond in the form of film to the millennia-old art of the poem. So it is natural to see the origins of the poetry film, with films by Michael Curtiz and the filmmakers of the Spanish avant-garde, among others, side by side with the latest additions to the genre. The media art exhibition from the
Netherlands completes the programme together with the CinemAperitivo from Italy.
For the first time, poets are presenting their works directly to filmmakers. The first results of a collaboration between Israeli filmmakers and German
poets are being presented, as are transformations of poems into film bystudents at our country’s film schools. All this would not be possible without a great many supporters, partners and sponsors. We would particularly like to thank the Hauptstadtkulturfonds, the Goethe Institute, Alfred Ritter GmbH & Co. KG, the German Foreign Ministry, the German Literature Fund, the Embassy of the Kingdom of the Netherlands and the German-Israeli Future Forum Foundation.
Film goes poetry! A warm welcome to all the filmmakers and poets and to our audience!


Thomas Wohlfahrt, Head of the Literaturwerkstatt Berlin and director of the ZEBRA Poetry Film Festival