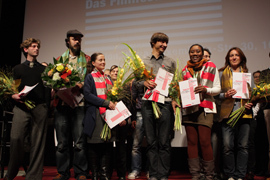 At Sun. 17th October 2010 the Jury of the 5th ZEBRA Poetry Film Festival has decided. The ZEBRA-Prize for the best Poetry Film goes to Robert Pohle and Martin Hentze (Germany) for the film "Der Conny ihr Pony", based on a poem by Gabriel Vetter. The Film Poetry Prize of the Goethe Institute went to Andrew Steggall (UK) for the film  „To the Marriage of true Minds“ basing on the Sonet 116 by William Shakespeare.The Ritter-Sport Prize donated by Alfred Ritter GmbH&Co KG, went to the German-Bulgarian production "An Anna Blume" by Vessela Dantcheva, after a poem by Kurt Switters. A special mention went to „Höpöhöpö Böks“, Text and Film by Eiríkur Örn Norðdahl (Island). The awards amount to total value of 10,000 euros.

The award of radioeins listeners jury went to Emma Passmore (UK) for  „Breathe“, the award of the children jury to „About Bigmouse“ by Constantin Arefiev (Russia), based on a poem by Ludmila Ulanova.