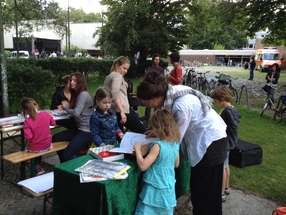 The Literaturwerkstatt Berlin/Haus für Poesie looks forward to welcoming the youngest. Visitors aged six to nineteen will be able to listen or read at the festival – and they can get involved in poems too! Anne Böhmert, a student at the FU Berlin, Dafne-Maria Fiedler, an actor and theatre pedagogue, Laura Klatt, a theatre pedagogue and director, Sylvia Krupicka, a literature disseminator, and Laura M. Schwengber, an interpreter for German sign language, will be providing school students in their workshops with new perspectives, tactile contacts, listening experiences, forms of play and other ways of accessing poetry.
Registration required at:
kulturellebildung@literaturwerkstatt.org

This intensive seminar will offer teachers of years 7 to 12 the opportunity to become familiar with current processes of analysing and disseminating poetry. In the first part we will be exploring the work of contemporary poet Norbert Hummelt in readings and conversations. In the second part, the creation of poetic texts and poetic images will be practically tried out in various workshops. There will be a choice of two writing workshops with different writing processes and the production of poetic images using self-made poetry films. No previous knowledge is required.

LesArt extends an invitation to poetry events in Berlin’s public libraries in Charlottenburg-Wilmersdorf, Friedrichshain-­Kreuzberg, Mitte, Reinickendorf, Spandau and Tempelhof-­Schöneberg.
Groups of children from the same year (year 4 to 6) grapple with poems by performing them, speaking them and/or making painting, drawings, etc. from them. Texts by Bertolt Brecht, Joachim Ringelnatz and Ernst Jandl, Mascha Kaléko, Hans Adolf Halbey and Josef Guggenmos invite the children to think together about defiance and dreams, love and loss, joy and friendship, and to find their own forms for presenting the poems.
Registration at the library in question.
For more information please go to: www.lesart.org