Welcoming address by Monika Grütters Minister of State for Culture 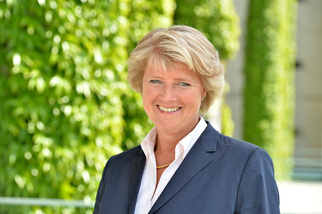 “Language is the sheath that holds the knife of the spirit,” as the great reformer Martin Luther said, who has left deep traces not only in the history of the Church but also in the vocabulary of the German language. Without him there would be no stopgaps (Lückenbüsser) or scandalmongers (Lästermäuler) – at least in the language – and nobody would be able to hide their light under a bushel. He was a virtuoso of the clear and vivid word and as such was able to “look at the mouths” of ordinary people and listen to what they said, as well as enabling them with his translation of the Bible to read the word of God for themselves.
One of the things the 16th poesiefestival berlin is devoting its special attention to is the sensuous language of Martin Luther, which promises us many interesting insights into the language resources we draw on. For this, as part of the Luther Decade, the Literaturwerkstatt Berlin has created a special exhibition in the run-up to the 500th anniversary of the Reformation in 2017 – a dictionary in the form of a lawn where visitors are invited to stroll and – poetically – pluck Luther’s words. I am very pleased that my Ministry has been able to provide financial assistance for this project.
This year’s poesiefestival is also giving us the opportunity to become familiar with poetry from China and to see how the Chinese state deals with its poets. That dictatorships seek to restrict and suppress the words of poets is a sure sign of the power residing in tender poetic words.

I wish to thank wholeheartedly Festival Director Thomas Wohlfahrt and his team for their commitment and for the wealth of ideas with which they are able year after year to attract the interest of many friends of literature in the poesiefestival berlin. I wish all visitors to the festival intense encounters with the German language and with the art of poetry.