The 20th poesiefestival berlin in the Academy of Arts is being formally opened this year by the State Minister for Culture and Media, Monika Grütters, and the Senator for Culture and Europe in Berlin, Klaus Lederer. Kerstin Hensel, Deputy Director of the Literature Section at the Academy of Arts, and Thomas Wohlfahrt, Director of the Haus für Poesie, will also be speaking. The opening is not a public event.

At the multi-voiced public opening gala Weltklang – Night of Poetry poets from all corners of the world will be reading, singing and performing in seven native languages. They demonstrate the wealth of contemporary poetry with all the diversity of its content, approaches and styles. An anthology is being exclusively published for the event with translations into German of the texts being read.

Since the release of her debut album, but especially since Anima Mysterium (I.O.T Records 2019), Yugen Blakrok (born in 1984 in the Eastern Cape Province) has been regarded as her country’s queen of alternative rap. Her appearance on the soundtrack of the film Black Panther was a major moment for contemporary South African music.

The books and readings of Patrizia Cavalli (born in 1947 in Todi, Umbria) enjoy cult status in her homeland. Her poems are depictions of an “ever open theatre”, the stage of which is the scene of life with the taxi meter running.

Anja Golob (born in 1976 in Gradec) is the shooting star of European poetry. Her poems are full of rips, nicks and crumbs. In a language that is extremely articulately jointed she tells of the beginning and end of love and of the “ThereYesterday and HereToday”.

The work of Rainer René Mueller (born in 1949 in Würzburg) is in the tradition of Paul Celan. In his poems, the after-rumblings of the horrors of the past century can still be felt. Mueller will be reading unpublished poems and a selection from his latest volume geschriebes. selbst mit stein (written things. self with stone) (Edition aouey 2018).

Eileen Myles (born in 1949 in Cambridge, Massachusetts) is now something like a rock star in the American poetry scene. She did her first readings in the legendary CBGB’s club in Manhattan’s East Village, where bands like the Ramones and Blondie played. She will be reading poems from her latest collection Evolution (Grove Press 2018).

The poems of Marion Poschmann (born in 1969 in Essen) are precise and quiet. Awarding the Berlin Literature Prize in 2018, the jury described her poetry as “[making] a quite different kind of deceleration happen. Following it you find whole new worlds of language opening up of Baroque opulence and expansive Romantic diversity”.

Fatemeh Shams (born in 1983 in Mashhad) was forced to leave her homeland in 2009. After several years in London, she now lives in exile in Philadelphia. Her poems have strong imagery that is harsh and elegant and, while political, are also intensely personal.

Poet and musician Keston Sutherland (born in 1976 in Bristol) is one of the most prominent exponents of contemporary experimental British poetry. Sutherland will be reading poems from his latest collection Whither Russia (Barque Press 2017), in which he montages and alienates quotes from such writers as Goethe, Heine and Hölderlin.

Xi Chuan (born in 1963 in Xuzhou) is one of the greats of contemporary poetry. Cosmopolitan and brimming with learning, he writes with laconic humour about leaking water pipes, corrupt officials with a romantic leaning and news that is written before the event.

Weltklang – Night of Poetry is kindly supported by The Mandala Hotel, the British Council, the Slovenian Culture Centre Berlin and the Italian Culture Institute Berlin.

The 20th poesiefestival berlin is a project of the Haus für Poesie in co-operation with the Academy of Arts. It is funded by the Capital City Cultural Fund (Hauptstadtkulturfonds) and the German Foreign Ministry, with the kind support of Maritim proArte Hotel Berlin. It is presented by taz, BÜCHERmagazin, tip, ASK HELMUT and Deutschlandfunk Kultur. 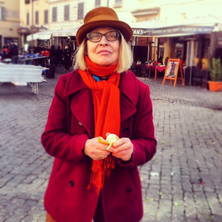