Aubergine with Windscreen Wiper – The Drawings of Oskar Pastior 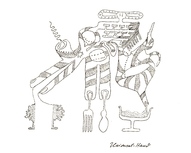 Exhibition. Oskar Pastior’s extraordinary poetic constructions and enigmatic word and language creations made him a favourite of friends of experimental poetry everywhere, and not just in Germany. As a draughtsman Oskar Pastior is practically unknown, completely overshadowed by appreciation for him as a poet who was awarded twenty literary prizes including, posthumously, the 2006 Georg Büchner Prize. This exhibition puts that right by focusing now on Oskar Pastior’s Zeichengebilde (drawing objects) and showing how they are connected with his Wortgebilde (word objects).

Pastior sketched in phases, parallel to his text projects, but also in the phases in between. His extensive graphic work appears as a voyage of discovery with an uncertain destination. His drawings entice us to daydream in our own imaginary worlds. Sense comes and goes by the back door, and meaning remains in a state of suspension.

Oskar Pastior (1927–2006) was born in Sibiu, Romania (German Hermannstadt) and was a member of the German minority there. The story of his deportation in the Soviet Union – he was sent to Donbass as a 17-year-old in 1945 for four years of forced labour – was related by Herta Müller in her novel Atemschaukel (The Hunger Angel). Pastior’s first book of poems was published in Bucharest in 1964. In 1968 he escaped to the West and lived in Berlin from 1969 as a freelance writer.

The exhibition Aubergine with Windscreen Wiper – The Drawings of Oskar Pastior is presented with the kind support of the Oskar Pastior Foundation, the German Literature Archive Marbach and the Embassy of Romania in the Federal Republic of Germany.