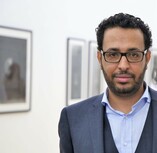 Readings of poems should not be missing from a festival of poetry films, and nor should the people who write them. We have invited five poets whose poems have provided the basis for film entries in this year’s competition and Prism to read their festival poems and current work and to give us an insight into their own worlds of poetic pictures – live and direct, loud and soft. As well as these films in words we want to hear from the poets what film versions do to their poems and how it feels to see their work transformed into another medium. A long ZEBRA night of readings, high-calibre, colourful, and a whole lot of poetry and talking.

The event is in German und partly in English. Most texts will be available in English.