The 10th edition of the ZEBRA Poetry Film Festival is showcasing the poetry film scene in Germany for the first time. From 5 to 8 December it will be presenting in a competition in Kino in der KulturBrauerei the best poetry films that have been (co)produced in Germany. Ten art schools in Germany have also produced and curated a programme of their own. As a contrast a special focus is on the poetry film in the UK, currently one of the most astonishing scenes in the genre.

The ZEBRA Poetry Film Festival, back in Berlin since 2018, is the biggest international platform for short films based on poems – known as poetry films.

This year’s open call was for poetry films produced or co-produced by Germans. From the approximately 500 submissions a programme commission have chosen the best films for the competition. In a ceremony on 8 December the jury of international experts on film, poetry and media will announce the winners.

Accompanying the competition the festival will provide an insight into the broad spectrum of poetry films, especially the poetry film landscape of the UK. Ten German art schools will be presenting new poetry films they have produced in the course of one year. Together with their British colleagues they will be discussing the importance of the poetry film in education and comparing art schools in Germany and the UK.

The best poetry film for children and youngsters is awarded in the ZEBRINO-competition, flanked by a varied workshop and film programme for Berlin schoolchildren.

In response to the ZEBRA open call, film makers have produced visual interpretations of this year’s festival poem "[native vegetation a natural resource]" by Daniel Falb (German original title "[Dieses regionale Getreide]") and the results will be shown at the festival. Readings by poets from Germany and the United Kingdom will round off the programme.

Further information and the complete programme from beginning of November here! 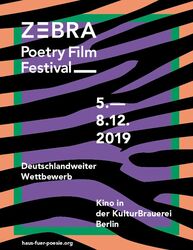