The new partial lockdown in November means that the cinemas will be shut and the ZEBRA Poetry Film Festival – deprived of its natural habitat – will, like so many other festivals as well, be moving on to the Web. It will be presenting the International Competition to find the Best Poetry Films online, as well as a programme of films and poetry with the country focus on Canada/Québec.

Over the Festival weekend (19.–22.11.) the Competition films, the Focus on Canada/Québec, the readings and the Festival Poem will be going online, framed by the Opening and the Awards Ceremony. The film programme for children and young people will be shown in Berlin schools. The Master Class with Tom Konyves will be taking place via Zoom. The other film programmes will be uploaded in stages after the Festival.

The Opening and Awards Ceremonies and the readings will be publicly streamed via Facebook, YouTube and #kanalfuerpoesie. In addition, for just € 7.99 you can purchase access to all the Festival’s film programmes as Video-on-Demand from Vimeo. Each programme will stay online for four weeks.

More information on Video on Demand 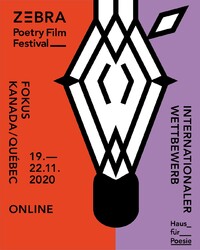