Call For Entries for the 7th ZEBRA Poetry Film Festival 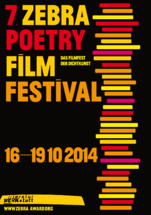 For the 7th time, the ZEBRA Poetry Film Festival is inviting entries for the competition to find the best poetry films. To qualify for entry, films should be short films based on poems. The total value of the prizes in the competition is € 13,000. From among the films submitted, a Programme Committee will nominate the films to be entered for the Competition and select the films for the various sections of the festival programme. The winners will be chose by an international jury.


The Festival is also inviting entries of films based on this year’s »Festival poem«, »Love in the Age of the EU« by Björn Kuhligk. The directors of the three best films will be invited to Berlin to meet the poet and have the opportunity to present and discuss their films. You can find the poem with a sound recording and various translations here >>.

The closing date for entries for all the Competitions is 25 April 2014. You can find the full conditions of entry and the entry form here >>.

All films submitted are automatically considered for all selection processes!

The ZEBRA Poetry Film Festival is a project of the Literaturwerkstatt Berlin in cooperation with interfilm Berlin and with the kind support of the Capital City Cultural Fund (Hauptstadtkulturfonds), the Goethe Institut, the German Foreign Office (Auswärtiges Amt) and Alfred Ritter GmbH & Co. KG. It takes place as part of the poesiefestival berlin.