The ZEBRA Poetry Film Festival takes children and young adults on poetic forays.
ZEBRINO shows filmed poems in all varieties for kids between 8 and 12 years of age,
thus introducing them to the genre of poetry film. The young audience will meet a yellow whale,
a shy monster and a boy with flowers growing on his head. At the end, they can choose their favourite film.

EVEN WHEN WE SLEEP

The warm and knowing daily life of an old woman and her cat.

Eating habits and activities of children alter with time and climate change. 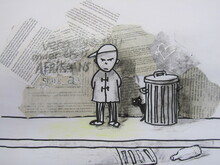 A fun family excursion in a yellow Peugeot with consequences.

The flowers on top of the flower-headed boy’s head always
brought him smiles but everything changed
when he encountered bullies on his first day of school.

If we are not careful, imaginary animals may eventually disappear.

Old snakes, loose teeth, hot tubs, and ugly people in your face.
This is the world when you are four.

A man is looking for two trees to hang his hammock.
But his quest will be more arduous than expected.

A story of a child’s courage in challenging an adult’s momentary lapse in judgment.

A white goose, locked up since ever, discovers freedom.
Like a second birth.

THE EEL, THE WEASEL AND THE VULTURE

Near an oak and a dried-up river, an eel, a weasel and a vulture meet.
They talk to one another, but do not get along.

A little girl, the Queen of Fun, and her brother,
the King of Dull, fight to death in an imaginary world,
to determine the course of the river of Love.

A lesson of friendship and goodwill in music and colors.