Anna Henckel-Donnersmarck (*1973 Frankfurt a. M.) studied art in London and documentary film at the Baden-Württemberg Film Academy. She works as a film maker (Busby, etc.) and video designer for stage and museums (including Berlin Staatsoper and Jewish Museum) and as a juror, moderator and curator for various film festivals (including Berlinale Shorts).

Heinz Hermanns (*1958 Duisburg) is head of the the International Short Film Festival – interfilm berlin and of the distribution and rental company of the same name. Co-founder of the Berlin cinema Eiszeit, he is juror and curator of numerous international film festivals and specializes in lectures on film language in short films. The subway short film festival »Going Underground« was brought into being by him in 2002. 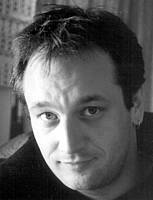 Heiko Strunk (*1966 Wolfenbüttel, Germany) has got a degree in German literature a. o., is project manager of lyrikline.org since 1999 and winner of the »Grimme Online Award« in 2005. He works at poesiefestival Berlin and is the editor and director of various ›poetry audio books‹. Representing the Literaturwerkstatt Berlin, he is the German editor of Poetry International Web.