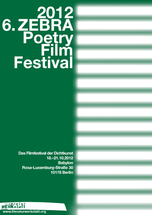 The ZEBRA Poetry Film Festival is calling for entries for the 6th competition to find the best poetry films! Entries should be short films based on poems. Prizes in the competition will be awarded to a total value of € 10,000. From all films submitted, a Programme Commission will nominate the films for the competition and select the programme contributions. The winners will be selected by an international jury.

The prizes that will be awarded are:

This year, for the first time, the ZEBRA Poetry Film Festival will also be making awards for poetry films in the categories »Best First Film«, »Best Film for Tolerance« and »Best Poem Performance on Film«.


The festival is also for the first time inviting everyone to make a film based on the poem [meine heimat] ([my home]) by Ulrike Almut Sandig. The directors of the three best film versions will be invited to Berlin to meet the poet and have the opportunity to present and discuss their films. You can find the poem with audio and translations here.

Closing date for entries for all competitions is 2 May 2012.

All films that are submitted will automatically be entered for all selection procedures!

The 6th ZEBRA Poetry Film Festival will be held from 18 to 21 October 2012 in the Babylon Cinema in Berlin.

The ZEBRA Poetry Film Festival is a cooperation project between the Literaturwerkstatt Berlin and interfilm Berlin and the Polish Institute Berlin and is kindly supported by the Capital Cultural Fund, the German Fund for Literature, the Goethe Institute and the Alfred Ritter GmbH & Co. KG. It takes place as part of the poesiefestival berlin.

Rules
1. Conditions of entry: To be eligible for entry, films may be no more than 15 minutes in length and must have been completed since 1 January 2009. In certain exceptional cases, a programme commission reserves the right to admit longer films. All films submitted must be audio-visual realisations of one or more poems. The copies of the films submitted for screening may be in any of the following formats: 35mm, DigiBeta, Beta SP, BluRay and DVD. All films on the screening copies which are not in English must be provided with English subtitles.

2. Entry and submission: Closing date for entries is 2 May 2012 (date as postmark). Entries must include: a completed entry form, a preview copy (DVD / VHS), a digital film still photo, a German or English literary translation of the poem / poems, a synopsis, a biography of the poet and a biography and filmography of the director.
All texts must be provided in digital form. Preview copies will remain in the archive of the Literaturwerkstatt Berlin and will be returned only at the express wish of the entrant and at their expense. Films are automatically entered for all programme categories and sections and prize competitions.

3. Selection of films: On the basis of the preview copies, the programme commission will select the films for the competitions and categories and all other sections of the programme. All selected films are automatically included in all selection procedures. From early September 2012, a list of the films that have been selected will be placed on www.zebra-award.org. Before then, no enquiries or questions will be answered regarding the selection. All participants will be informed of the result of the call for entries by e-mail from August 2012 onwards.

4. Submission of screening copies: Screening copies of the selected films must arrrive at the Literaturwerkstatt Berlin by no later than 1 September 2012.

5. Cost: Entering the 6th ZEBRA Poetry Film Festival is free! Entrants pay for sending the entry documents and the preview and screening copies of the films to Berlin. All submissions from abroad must be endorsed: »For temporary use. For cultural purposes only. Contents have no commercial value.« The value stated on the attached proforma invoice (download below) may not exceed € 19. Submissions that are insufficiently stamped or falsely declared will not be accepted. Any costs incurred because of a false declaration or insufficient postage paid will be billed to the sender. The Literaturwerkstatt Berlin will pay for the return of screening copies.

6. Insurance: Delivery and return of film copies is at the risk of the sender. Screening copies are insured for the duration of the event for the value of the material on which they are copied. Any claims for damages must be asserted by no later than ten days after return dispatch. The courts in Berlin have jurisdiction.