Finland is currently in the middle of a golden age of poetry, with an unprecedented number of readings, magazines and television shows.

Poetry in Finland has never known so much sensuousness, experimentation and vitality. As part of the poesiefestival berlin 2013 poets from Finland will be coming together with their German-speaking colleagues to translate each others’ poems.

The results will be presented at readings in the Academy of the Arts on 11 and 12 June 2013. The poets are Jyrki Kiiskinen, Teemu Manninen, Aki Salmela, Helena Sinervo, Olli Sinivaara and Henriikka Tavi from  Finland and Hendrik Jackson, Norbert Lange, Kerstin Preiwuß, Thomas Rosenlöcher, Andre Rudolph and Kathrin Schmidt from Germany. 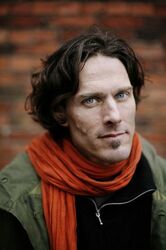