Preparations for the poesiefestival berlin (5–11 June) are in full swing. For the first time in its 21-year history, it is taking place as a purely online festival. The festival site will be going live from the end of May.

The festival is presenting around 150 writers from 29 countries, who will be appearing in more than 100 online events including talks, readings, slams, interviews and workshops. A huge challenge! But we will definitely be keeping some familiar formats such as Weltklang – Night of Poetry (with readings by nine poets from nine countries) and the translation workshop VERSschmuggel/reVERSible. These are currently being put together all over the world in Zoom conferences, videos, audio recordings, etc., with post-production in Berlin to make them Internet-compatible. They will be joined by live formats during the festival itself.

The Poetry Talks featuring poets from the Weltklang programme will be uploaded as text interviews. Poets’ Corner is even getting a change of name: the annual series that kicks off the festival cannot go out into the streets of the Berlin neighbourhoods this year, so instead it will be coming from the homes of Berlin poets, and Poets’ Home (Corners) will feature readings and home stories reflecting the “corontine”. Even the Poetry Market that takes place on the Sunday during the festival will be available online, with publishers and magazines presenting their current poetry output in blogs and vlogs. Poetic Education offers further training for poetry disseminators and workshops on sound poetry and Poetry Yoga, with closing readings in which the next generation of poets present their work.

Preview of the online programme #planetpgoeson

Poets’ Home (Corners) covers the city with poems. 33 Berlin poets and performers feature in short videos from the Poets’ Home.

The heart can’t be freely bent like the knee

I can see more colours than other people

Interview with his translator Ernest Wichner

Small zig-zags and the feel for completeness

Interview with her translator Andrea Grill

With an image of me in mind

Interview with her translator Simone Kornappel

ICORN, the International Cities of Refuge, had planned a General Assembly of artists, writers and journalists in Berlin in June 2020. Unfortunately, because of the current restrictions on freedom of assembly, this meeting will not now be taking place. But the poesiefestival berlin will be seeing to it that the borders of language as well as of thought are kept open regardless and is bringing together three of the participants in an online format.

Thirteen Ways of Looking at a Short Talk

The Lecture will be given in English, with German translations available. Deutschlandfunk Kultur will be broadcasting the Lecture on 14 June at 10.03 pm.

Undo The Latches of Ordinary Understanding

When the statue of Perseus by Benvenuto Cellini was unveiled in Florence in 1554, a number of poets affixed sonnets in praise of the artist to its pedestal. Six translators have now for the first time translated these texts into German. The film tells of Cellini and the statue of Perseus and provides an insight into the translation workshop. The statue and the sonnets are given visual presentation by the typographer Andrea Schmidt.

The Poets’ Evening on the film is planned for the Autumn.

Caroline Bergvall (born in Hamburg in 1962) is a politically thinking and acting poet in the emphatic sense. This is demonstrated in her new multi-lingual work Sonic Atlas, which reacts to the refugee crisis and modern extremism.

Sonic Atlas has been created in collaboration with the well-known British composer Gavin Bryars and seven UK poets who joined Caroline Bergvall in writing poems on the subject of ‘Refuge’. An adapted version of Sonic Atlas for two performers is being specially presented for this evening.

More and more poets are intervening in processes of political negotiation. Franck Leibovici has advised the International Criminal Court (ICC) in Den Haag, to line up legal materials with poetic strategies. Kadhem Khanyar was a co-founder in Iraq of the Culture Militia collective which does poetry performances at sites of violence and terror. Antoine Cassar has since 2009 been distributing the long poem ‘Passaport’, which is intended to serve as an anti-passport and replacement passport. Maud Vanhauwaert built a “Toren van Babel” in Antwerp as an open meeting place for multi-lingual poetry and discussion.

After decades in which poets have turned away from political reality, a new energy has built up in the present – young poets take positions, using poetry to inspire, motivate and even mobilise people. What gives poetry its social power?

In their videos produced specially for the poesiefestival the artists set to music and recite texts of their own and by others as various as their music, from Plath to Rilke, from Rumi to Norwegian Christian hymns transforming themselves into melodious Sufi texts, to jazzy Polish-German Blues-Rock poetry to settings to music of Italian poems by Sara Ventroni and Gabriele Frasca.

The texts are read and recited in English, German, Pashtu/Afghaani and Italian. German translations are available.

“look, here comes the poison queen! her children carry/swarms of gnats in their hearts, how does she do it? that’s art!”

Generate enthusiasm for poetry! But how? This further training webinar offers poetry disseminators and teachers of pupils in years 8–12 the opportunity actively to familiarise themselves with the analysis and dissemination of contemporary poetry with skilled support using current processes. The focus this year is on the work of poet Birgit Kreipe.

Setting poems to music with sounds. Tutorial for music and poetry, taught by musician and songwriter Josepha Conrad.

Colours in the Poem with Tanja Dückers

The poesiefestival berlin has been taking place since 2000 and is the biggest of its kind in Europe. As well as the book, poetry has long sought other forms of presentation and experiments with theatre, performance, music, dance, film and digital media. The festival enables poetry to be experienced in all its diversity of forms and welcomes up to 13,000 visitors each year.

The 21st poesiefestival berlin is a project by the Haus für Poesie. Funded by the Capital Cultural Fund and with the kind support of the Federal Foreign Office, the Government of Canada, the Ministère des Relations internationales et de la Francophonie du Québec, the Embassy of Canada, the Vertretung der Regierung von Québec in Deutschland, as well as Federal Agency for Civic Education. Presented by Der Freitag, taz, BÜCHERmagazin, tip Berlin, rbbKultur, ASK HELMUT, iHeartBerlin and Deutschlandfunk Kultur. 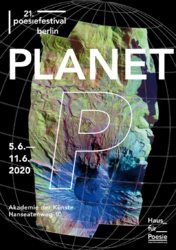