The 21st poesiefestival berlin went viral on the web

The online edition of the 21st poesiefestival berlin (5–11 June) came to a successful conclusion yesterday evening. Under the heading Planet P, 150 poets from 29 countries brought the world-wide contemporary poetry scene to the computer screens. In total, the productions were accessed around 100.000 times.

The website poesiefestival.org, specially created for this occasion, was at the heart of the Festival. As well as viewing the video productions, visitors could browse through the virtual Poetry Market, where 30 publishers and magazines presented their poetry output, and could read interviews and anthologies and dive into a Virtual World. The website and productions can still be accessed in the Media Library even after the Festival.

State Minister for Culture Prof. Monika Grütters opened the Festival with a video speech: “What will remain of the times we are living through just now? Hopefully it will include the realisation that poetry is more than a ray of light in lockdown. That poetry with its powerful linguistic images and linguistic melodies has the power to break down boundaries – the boundaries of our language and so the boundaries of our world.”

Klaus Lederer, Senator for Culture and Europe, emphasised in his speech the media-oriented work the Haus für Poesie has been doing over the past few years: “Setting up platforms like lyrikline, the ZEBRA Poetry Film Festival and digital poetry projects has created excellent conditions for quickly getting started in an interactive broadcasting operation.”

Jointly with 50 partners in Germany and internationally, the Haus für Poesie reconceived around 40 events for the virtual space. Around the whole world, the artists involved recorded their readings and performances, which were then laboriously post-produced in Berlin and transformed into coherent broadcasts.

In keeping with the Festival’s focus this year on Canada, the world-renowned Canadian poet Anne Carson gave the Berlin Poetry Lecture. In her lecture, entitled Thirteen Ways of Looking at a Short Talk / Dreizehn Blickwinkel auf Einige Worte she took us with her from her kitchen table at home on some poetological and philosophical ramblings into the worlds of Classical Antiquity and her own childhood. The lecture has been published simultaneously by Wallstein Verlag.

The trilingual translation workshop VERSschmuggel /reVERSible: Canadian Poetry / Poésie du Québec / Dichtung aus Deutschland brought together six German-speaking poets with six English-speaking and six Francophone poets from Canada, who translated each other in Zoom sessions with the assistance of language moderators and gave us an insight into their work together.

The projects Widerworte. Poesie als politischer Aktivismus / Words of Objection: Poetry as Political Activism and Poetry & Activism explored the political and social potential of poetry. Die Unerhörte Poesie / Unheard Poetry brought together young voices from the Europe’s black diaspora. The diverse Berlin poetry scene was presented this year in Poets’ Home (Corners), not as usual in Berlin’s city districts but in their living rooms.

Poetic Education offered many opportunities for participation and further training for all age groups – tutorials on sound poetry and physical poetry, a seminar for literature disseminators, a master class on queer poetry and a workshop for primary school children. The next-gen workshops Open Poems and Young Poems were presented with a closing reading and an anthology.

Digitality played a large role in the Festival not just in its design but also in its content. Cultural scholar Aleida Assmann and media scholar Mercedes Bunz discussed in the Forum and in a follow-up live video chat how cultural memory is affected by digital transformation and the accompanying changing infrastructure of memory. Aleida Assmann: “Indeed, poetry is something that is developing very strongly towards the future and permanence. If we think of Horace, who creates a monument that is supposed to be more lasting than iron: not the monument of a Pharaoh, no pyramids and all those things, but a poem, a poem of air – it’s an idea that Shakespeare repeatedly took up as well, that a poem lives on its the future as long as there are people to read it.” 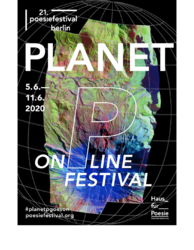