Poetry Talk: Condemned to be modern – Poetry from Brazil today

"We are a country condemned to be modern", wrote Mário Pedrosa about Brazil. That is especially true of poetry. Sincw the 1950s, more different discourses and practices have arisen in Brazilian poetry than ever before in the history of Brazil. The range extends from Concrete Poetry, linking with the joy in experimentation of literary Modernism and the avant-garde, to poets who revive the legacy of Iberian poetry. Three powerful voices from the country will be presented, Érica Zínganos, who cheekily interrogates the literary tradition from Camões to Madame Bovary to the Guinness Book of Records, Dirceu Villa, who is distinguished by his radical plurality, and Ricardo Aleixo, who turns his poems upside down with multi-media and makes them sing. Three writers taking very different routes to merge in a diversity of styles. But there is one thing they have in common - language as an art form. 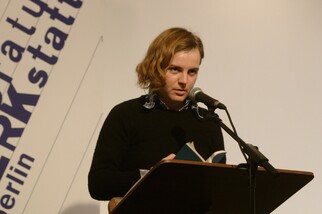 The second reading of the German Brazilian translation workshop.
The results of the VERSschmuggel workshops and readings will be published in time for the 2012 Frankfurt Book Fair in a bilingual anthology with a CD, jointly between the Verlag Das Wunderhorn (Heidelberg) and 7Letras (Rio de Janeiro).
Horácio Costa (born 1954 in São Paulo) writes texts somewhere between poetry and prose and replies ironically to the question of genre. A professor of literature and translator of Octavio Paz, he sees the Portuguese language as a particularly refined instrument for his poetic writing. In 2004 an anthology of his poems was published by Haroldo de Campos. Gerhard Falkner (born in 1951 in Schwabach) is indisputably one of the most important and influential poets of the present. He is a poet, dramatist, essayist and translator and lives in Berlin and Bavaria. In their citation awarding him the 2009 Peter Huchel Prize for his collection Hölderlin Reparatur, the jury praised Falkner's "possibilities for sublime speech in an age of damaged language worlds."
Marcos Siscar (born in 1964 in Borborema, São Paulo) has dedicated himself as a poet essayist and literary scholar to the French tradition from Baudelaire to Derrida. In his poems he traces the transitions between the concrete and the reflective, banal reference and lyricism, reportage and metaphysical questioning. A great narrator in the small form, Jan Wagner (born in Hamburg in 1971) combines with virtuosity the everyday with the mythic, classical forms with free improvisation. A poet, critic, editor and translator (of, among others, Matthew Sweeney and Simon Armitage), he lives in Berlin.
Érica Zíngano (born in 1980 in Fortaleza) reflects in the library, at home and on the street on her own poetic creation, but with humour. Her poems and video works underlie the everyday with a strong rhythm. She uses apparently banal images to reveal tensions within the language. When Ann Cotten's (born in Iowa, USA, in 1982) Fremdwörterbuchsonette [Foreign Dictionary Sonnets] were published by Suhrkamp in 2007, she was hailed as a wunderkind and the boldest voice of the new generation in German-language poetry, as the "grandiose Austrian-American bumpkin from Iowa". Her Florida Räume [Florida Rooms] (Suhrkamp 2010) involves nothing less than an "industrial revolution in literature, freed from the idea of the artistic."

The Big Eat – On Wolfing and Being Wolfed

They are metrophagi, they gobble up cities. Poets Sabine Scho (Germany, now São Paulo) and Ricardo Domeneck (Brazil, now Berlin) depict the great process of eat and be eaten in big cities. In sound and image, these two poets, paired for the 2008 VERSschmuggel workshops, take the audience on an expedition from Berlin to São Paolo and back again. They play with the Anthropophagic Manifesto of Oswald de Andrade and report on the savage, naked cannibals first reported by German mercenary Hans Staden in 1555.
Sabine Scho (born in 1970 in Ochtrup) experiments with the integration of word and image. Together with Monika Rinck and Ann Cotten she is part of the Rotten Kinck Schow. She has published two collections of poems and had been awarded, among others, the Leonce und Lena Prize. She has live in São Paulo since 2006.
Ricardo Domeneck (born in 1977 in Bebedouro , São Paulo) is a poet, video artist and DJ. He has published five books of poems in Brazil. His first collection in German will be appearing from the Verlag Johannes Frank in late 2012. He has lived in Berlin since 2002.