Preview of the Haus für Poesie programme for 2020

Come! Into the Open – a series of events on Hölderlin in March 2020

20 March 2020 is the 250th anniversary of the birth of Friedrich Hölderlin. The Haus für Poesie is celebrating this poet of the German language, who was at first neglected and then admired, in March 2020 with a three-day series of events. It will be accompanied by a poetry education programme for school classes and teachers.

17 March 2020
The Hölderlin World Sound: Friedrich Hölderlin and his translators
Translators from around the world are invited to a colloquium to discuss the history of the reception of Hölderlin and his fascination in their countries. They include Luigi Reitani (Italy), Helena Cortés Gabaudan (Spain), Aris Fioretos (Sweden) and Zhengxiang Gu (China), Maria Teresa Dias Furtado (Portugal), David Constantine (United Kingdom), Mehmet Bariş Albayrak (Turkey), Mati Sirkel (Estonia)

19 March 2020
Thus I came among the Germans: German-language poets and Hölderlin
Four German poets from former East and West Germany talk about “their” Hölderlin. Are or rather were there differences in his reception west and east of the Elbe? With Marion Poschmann, Kerstin Hensel, Uwe Kolbe and Gerhard Falkner

UNESCO inaugurated the first World Poetry Day in 2001. Since then, the importance of poetry, the diversity of language as a cultural good and the significance of oral traditions have been celebrated on this day each year. Once again, under the patronage of the German Commission for UNESCO, the Haus für Poesie together with its partners is organising the central event in Germany, which is taking place on 20 March.

Under the heading Planet P the 21st poesiefestival berlin is taking place from 5 to 11 June. The international festival of poetry will shed light on poetry as political practice in movements such as ‘lyrical activism’. Canada is the partner country for 2020, and its linguistic diversity will be at the centre of the festival programme. The translation workshop VERSschmuggel / reVERSible will also reflect this with three languages – German, English and French.

Weltklang – Night of Poetry, the big annual opening gala, and Poets’ Corner, poetry readings and performances in Berlin’s city boroughs, will also once again be part of the festival.

The most important literary competition for young German-speaking writers of prose and poetry takes place once again this year in the Heimathafen Neukölln. Many important writers have started their careers at the open mike, including Karen Duve, Julia Franck, Terézia Mora, Tilman Rammstedt, Kathrin Röggla, Jochen Schmidt, Ulf Stolterfoht and Judith Zander.

The ZEBRA Poetry Film Festival has been around since 2002. It was the first and is the largest international platform for short films based on poetry - the poetry films. Every year, it offers poets, film and festival makers from all over the world a platform for creative exchange, brainstorming and meeting with a broad audience. With a competition, film programmes, poetry readings, retrospectives, exhibitions, performances, workshops, colloquia, lectures and a children's program, it presents in various sections the diversity of the genre of poetry film. In 2020, the ZEBRA Poetry Film Festival is once again inviting entries for the International Competition to find the best poetry films. More information 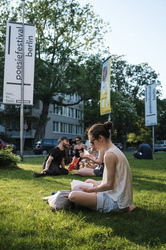