Under the heading There lies Europe, the 22nd poesiefestival berlin from 11 to 17 June 2021 will be looking at the poetry of Europe in all its diversity of forms and languages and, in spite of the pandemic, building poetic bridges across the continent. The Festival will be paying special attention to Europe’s many languages: regional and minority languages, multilingualism and the ambivalence between languages and language policy.

In the FORUM: Europe’s diversity has no skin, Europe’s wealth of languages is the starting point for an approach to the cultural, social and political reality of the continent from the linguistic side. The Turkish journalist Can Dündar, former editor-in-chief of the newspaper Cumhuriyet, will give a lecture on European multiculturalism and multilingualism. Representatives of the Directorates General of the European Commission for Translation and for Education and Culture together with linguist Jürgen Trabant and writer Zoltán Danyi have been invited to take part in the subsequent discussion. Afterwards, poets from “small” languages will be reading their poetry and talking about the relationship of their languages to the “big” languages.

To enable a deeper understanding of the topic, written interviews with the writers can be accessed online on the Festival website from 1 June in the original language and German translation: The writers will be talking in depth about questions of linguistic identity, challenges and opportunities thrown up by multilingualism and language policy in their countries.

Senka Marić (BIH), in her interview, describes the linguistic situation in the post-Yugoslav states thus, “As I am firmly convinced that this is one and the same cultural space, literature, too, gains in importance from an emphasis on common features: it is a testimony to the poetological diversity of a greater cultural space, a greater language and a greater literature.”

Latvian poet Sergej Timofejev says about the relationship of the “small” Baltic languages to Russian, “It is a matter of preserving and continuing to develop Latvian, Lithuanian and Estonian, which is why the public is very receptive to such processes. Russian is here on the one hand the language of the biggest minority, but on the other hand, it is also the language of a giant and not very predictable neighbour with its own political interests. For us as writers writing in Russian the essential point is that culture can also happen here in this language; it is not just the language of the street or of buying and selling.”

Aleksandr Skidan (RUS), in his interview, summarises his understanding of Europe thus: ”For me, Europe is more defined by its historical and cultural context, from which a political context cannot be excluded (Kant’s idea of eternal peace, for instance). And what I would take as being definitive of being European is the idea of the figure of the Other, the possibility of thinking the Other (even beyond the European), of imagining the Other and being open to it.”

All interviews and essays can be accessed free of charge at poesiefestival.org 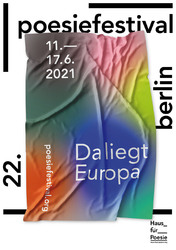