With the theme Da liegt Europa/There lies Europe, the 22nd poesiefestival berlin from 11 to 17 June 2021 will be celebrating the poetry of Europe in all its forms and diversity of languages and in spite of the pandemic will be building bridges right across the continent. The decision as to whether the Festival can take place live in the Academy of Arts or – like last year – completely or partly online is due to be taken in mid-March.

“There lies Europe. What does it look like?” asked Kurt Tucholsky in 1932 in his poem ‘Europe’ written under the pseudonym Theobald Tiger, in which he describes the drifting apart of European states in favour of national interests and to the detriment of common interests and of diversity seen as something positive. The 22nd edition of the poesiefestival berlin is setting out to point up the linguistic, cultural and poetic diversity of Europe and find common denominators through poetry.

The poesiefestival berlin will open with Weltklang, the Night of Poetry. Nine poets from all parts of the world will be reading and performing in their mother tongues, this time including Marieke Lucas Rijneveld (The Netherlands), Marko Tomaš (Bosnia and Herzegovina), Valzhyna Mort (Belarus), Chus Pato (Galicia), Peter Waterhouse (Austria), Judith Zander (Germany), Ben Lerner (USA) and Ichiko Aoba (Japan).

This year the Berlin writer and artist Johannes Jansen (born 1966 in East Berlin) will be giving the Berlin Poetry Lecture, entitled Ergebnis einer Isolation. The Lecture will be published simultaneously by Wallstein Verlag.

In the Forum, Europe’s multilingualism will be the starting point for approaching the cultural, social and political reality of the continent. The Turkish journalist Can Dündar will give a talk, and the speakers invited to take part in the panel discussion afterwards include linguist Jürgen Trabant and writer Zoltán Danyi.

This year’s edition of the Festival is paying special attention to Europe’s regional languages, Europe’s Archipelago of Languages. The focus will be on the multilingualism of five European regions – Spain, the Balkans, the Baltic, Romania and the Caspian Sea – which will be looked at in five events from the perspectives of language policy and linguistic nationalism, identity and poetic tradition.

The current political situation in Belarus means that it appears more important than ever to make the poetry of Belarusian poets available to the German readership and deepen bilateral ties. This is why this year the translation workshop project VERSschmuggel will feature Belarusian and German poets translating each other. The poets who have accepted the invitation to take part include, on the Belarusian side, Dmitri Strozev, Julia Cimafiejeva and Maryja Martysievič, and on the German side, Uljana Wolf, Ulf Stolterfoht and Özlem Özgül Dündar.

An anthology of Poetry of the Black Diaspora in Europe is to be published for the poesiefestival berlin by Das Wunderhorn Verlag and features black poets who were born or grew up in Europe and putting their texts in a common context. The editor and writer Fiston Mwanza Mujila and poets featured in the anthology will be coming together to give a reading at the Festival.

For ten days every summer Berlin is transformed into a bastion of poetry. 100–200 poets and artists come from around the world to the poesiefestival berlin and present current trends in contemporary poetry. The Festival allows poetry to be experienced in all its diversity of forms and welcomes up to 13,000 visitors every year.

The 22nd poesiefestival berlin is a project of the Haus für Poesie in cooperation with the Academy of Arts. Funded by the Capital Cultural Fund. Presented by Der Freitag, taz, BÜCHERmagazin, tip Berlin/ EXBERLINER, rbbKultur, Deutschlandfunk Kultur and ASK HELMUT. 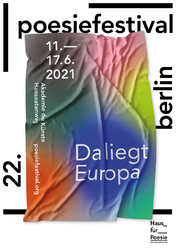