The Hitchhiker's Guide to the Norwegian Galaxy 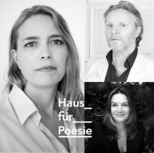 The focus of the Frankfurt book fair is a good occasion for discovering poetry from Norway. Three authors are coming to Berlin beforehand and present their new poetry books. They are recorded for Lyrikline and can be listened to and read very soon.

Terje Dragseth (born in 1955 in Kristiansand) is one of the most important voices of his generation. Rooted in the tradition of sci-fi-poetry in Bella Blu. Håndbok for verdensrommet (2015) the space probe Bella Blu moves through outer space 1299 days with 17 km/h.

Marte Huke (born in 1974 in Lørenskog) is reading poems from her debute Delta (2002). Like a river meandering in the delta, an I, a you and sometimes a we move around each other. This is not classicist nature poetry, but rather the strength of nature reveals itself in humans.

In Sigd (english Sickle, 2016) Ruth Lillegraven (born in 1978 in Granvin) descends deep down into the memory of the language and of the country. It's a reassurance against the time, an anchoring in language as a knowledge store. In Sickle she draws on diaries, sagas, myths, legends and newspaper reports from the 19th century.

The event is translated in Norwegian and German.

An event together with NORLA, Norwegian Literature Abroad and the Royal Norwegian Embassy.