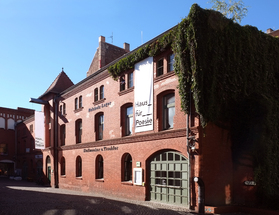 Since its foundation in 1991, the Haus für Poesie, formerly the Literaturwerkstatt Berlin, has been promoting and supporting all areas of literature, but especially poetry, both as the written word and in conjunction with other art forms and media. Its work has focused exclusively on poetry since 2000. It is the venue where contemporary poetry in all its diversity of forms is showcased and discussed.

On its 25th anniversary in 2016 the Literaturwerkstatt Berlin changed its name to the Haus für Poesie.

The Haus für Poesie brings poets to Germany from all over the world and endeavours to promote German authors abroad. Its production commissions provide incentives for innovation and experiment. The Haus für Poesie opens up dialogue with the audience, promoting access to poetry and understanding of poetry and its forms among the public.

One the main concerns of the Haus für Poesie is to nurture and encourage the next generation of writers and to get children and young people excited about poetry.

The Haus für Poesie has built up formats and structures which are unique for the art of poetry in Germany and in some cases unique in the world.

With the web portal www.lyrikline.org, which has been awarded the Grimme Online Prize, the Haus für Poesie runs the world’s biggest online portal for contemporary poetry. Poems can be listened to in their original languages, with translations which can be read alongside. Lyrikline takes poetry from our country out into the world and makes poetry from around the world known in the German language area. The platform is made possible by a network of partner institutions in more than 50 countries.

The poesiefestival berlin is the largest of its kind in Europe and year by year brings some 150 well-known poets and artists to Berlin from all over the world to be part of the 10-day international celebration and discussion of poetry.

The VERSschmuggel / reVERSible translation workshops in which pairs of poets from two different languages translate each other ensure that German poetry gets the very best translations and poetry from other languages is translated into German.

The ZEBRA Poetry Film Festival brings together poetry films from around the world every two years and is the only festival of its kind internationally.

The in-house programme of events of the Haus für Poesie in its event room in the Culture Brewery provides continuity throughout the year for the ongoing interaction with poetry with book launches, discussions and poetry from around the world.